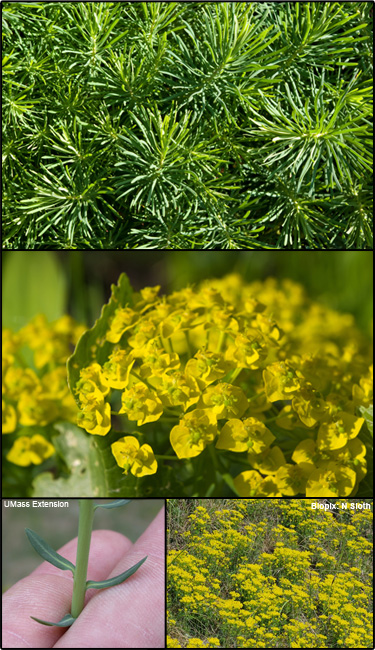 Description: Introduced to North America as an ornamental plant in the 1860s; widely planted in cemeteries and often called "graveyard weed".

Habit: Erect, herbaceous to semi-woody perennial; grows 6-12 in in height.

Leaves: Numerous, bright green in color, linear in nature, alternate along the stem and in whorls where they subtend the inflorescence; 0.4-1 in long and 0.04-0.1 in wide.

Flowers: Bright yellow-green in color that turn to purple-red as they mature, clustered at the top of plant, the true flowers are small and lack sepals or petals; blooms in May through August.

Fruit and seeds: The fruit is three lobed and contains 1-3 egg shaped smooth gray seeds; fruits are explosive capsules that split open when mature and throw seed to over 16 ft.

Monitoring and rapid response: Manual control can be difficult due to extensive root system; effectively controlled using any of several readily available general use herbicides such as glyphosate; There are eleven species of European insects (Five chrysomelid beetles in the genus Aphthona and one cecidomyiid fly gall midge, Spurgia esulae Gagne) which have been effective control. Credits: The information provided in this factsheet was gathered from the U.S. Forest Service.