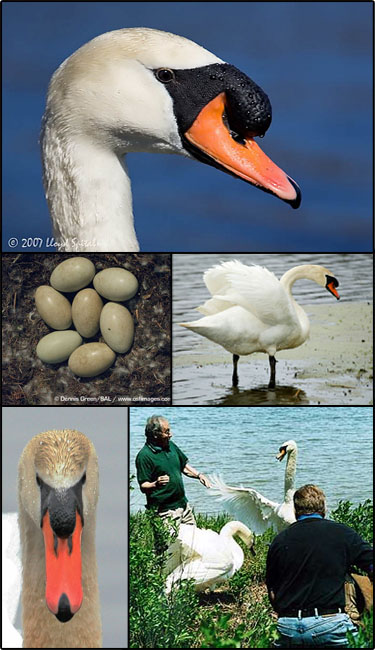 Description: Introduced to North America from Europe in the mid-1800s to adorn city parks and large estates. The first feral mute swans was introduced to MI in 1919 in Charlevoix County. The population in MI is approximately 15,500 as of 2010.

Identification: Adults are the only swan with an orange bill and have a black knob on the top of their bill, their neck curves like an "S". Adults grow to 55-63 in (140-160 cm) long and have a wingspan of 79-94 in (200-240 cm). Males average 24-26 lbs while females average 19-20 lbs making them one of the heaviest flying birds. Bright white in color. Young birds are not white and their bills are dull greyish-black.

Impact and Damage: Dangerous to humans (very aggressive), they drive out native waterfowl and other wetland wildlife with their hostile behavior, they destroy wetland habitat by consuming 4-8 lbs of plants a day which are a main food source for native birds and cover for native fish and invertebrates.