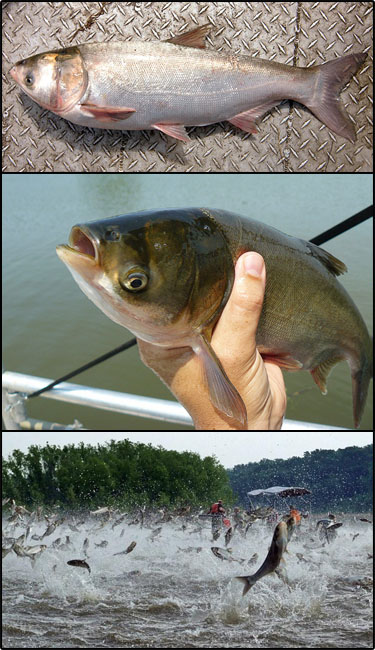 Description: Introduced to the United States in 1973. Now established populations in at least 16 states. Spread includes most of the Mississippi River drainage as well as the Missouri and Ohio Rivers and tributaries.

Identification: Olive to gray above and silver or white on sides and below. Body deep and laterally compressed. Eyes below the middle of head. Large terminal mouth. Dorsal fin origin about even with pelvic fin origin. More than 100 rakers fused into a spongelike filtering apparatus on the first gill arch; also pharyngeal teeth. Can grow up to 48 inches.

Reproduction: Silver carp are sexually mature at three years. Spawning can occur anytime between April and September; groups of 15 to 20 fish migrate upstream to spawn. Water with some current is necessary for reproduction so the eggs and larvae can float downstream and hatch. They produce hundreds of thousands of eggs when they spawn, allowing them to establish large populations.

Impact and Damage: Silver carp were at first introduced to some aquatic communities with the intention to control phytoplankton levels. Large populations of silver carp can be damaging to native larval fishes, mussels and some adult fishes that rely on phytoplankton for food. Silver carp have the potential to spread diseases that can wipe out native fish populations. Their aggressive jumping also presents a safety threat to recreational boaters and anglers.

Similar species: Bighead carp (Hypophthalmichthys nobilis), which can be distinguished by their shorter ventral keel and numerous, small irregular black blotches along their sides.

Monitoring and rapid response: The U.S Army Corps of Engineers and the State of Illinois built an electric barrier to prevent the spread of silver and bighead carp into the Great Lakes. Public awareness and education of these invasive species and the threat they pose to our ecosystems have been put in place in several states. Research on these species is being conducted to assess the threats their spread poses to the Great Lakes and to determine the most effective control method. Credits: The information contained in this factsheet was provided by the Shedd Aquarium and the Global Invasive Species Database.