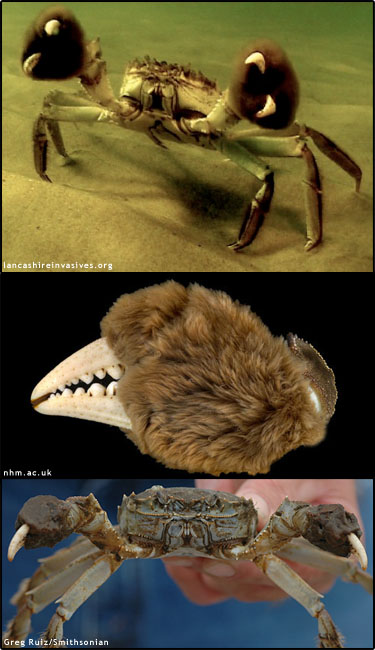 Description: Probably introduced via ballast water; first reported in the Great Lakes in 1965 when a specimen was caught in a water-intake pipe; several have been found migrating in Thunder Bay, Lake Superior, in 2005 and 2007.

Identification: Adults can grow up to 4 inches wide; light brown to olive green in color; "furry" claws that look like mittens with white tips; 8 sharp-tipped walking legs are more than twice as long as body width. They also have a notch between the eyes, 4 lateral carapace spines and a smooth, round body shape.

Habitat: Native to northern China and Korea. Shallow waters in bays and estuaries; migrates upstream in rivers an streams; spends most of its life in freshwater, returning to salt water to spawn.

Reproduction: Reproduces in salt water. A single female can produce from 250,000 to more than 1 million eggs. Males and females are believed to die following reproduction. Females brood the eggs and, upon hatching, larvae are planktonic for 1 - 2 months. Larvae pass through a series of developmental stages: a brief non-feed pre-zoea stage, 5 zoea stages and one megalopea stage.

Impact and Damage: Chinese mitten crabs can interfere with fishing by stealing bait. Their mass migrations often destroy the nets and lines of shrimpers and other fishmen. They can block or clog traps, nets, and water-intake pipes; they host the oriental lung fluke which is a human health concern; and they can eat almost anything including aquatic plants, native fish eggs, mollusks and shellfish.

Similar species: Juvenile mitten crabs can be confused with Harris mud crabs which can be distingushed by no notch between their eyes, non-hairy, white tipped claws, ridges on back, dull greenish-brown color and their maximum carapace width is 3/4 of an inch.

Monitoring and rapid response: The best control is preventing their spread. Once established, mitten crabs have the ability to disperse widely and quickly on their own. Trapping crabs has shown to not be effective. Credits: The information provided in this factsheet was gathered from the "Invaders of the Great Lakes" produced by Wildlife Forever and the Sea Grant Great Lakes Network and the Global Invasive Species Database.