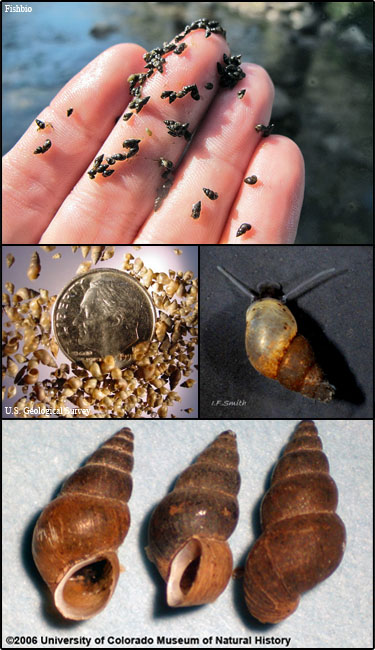 Description: There are two genetic types of New Zealand mudsnails: Clone 1 and Clone 2. Clone 1 was first discovered in Idaho in the 1980s, and has most recently been discovered in a southern Wisconsin stream. Clone 2 is in parts of the Great Lakes Region: Lake Erie near Cleveland, Lake Michigan near the Waukegan Harbor, and Lake Superior near the Duluth-Superior Harbor.

Identification: Very small. It is an average of 1/8 of an inch long with 7-8 whorls with a right-handed coiling and deep grooves. Shell color varies from gray and dark brown to light brown.

Habitat: Native to New Zealand. Found in flowing freshwater with silt/sand sediment to very brackish rivers; lives in water as deep as 60 feet in freshwater lakes or reservoirs.

Reproduction: Self reproducing females make up 95% of their population and give birth to well-developed clones. Females can produce 20-120 embryos per female and produce an average of 230 juveniles per year.

Impact and Damage: May affect critical food webs in trout streams and other waters. They also may compete for food with native bottom-dwellers. Lakes predators and reproduces at an alarmingly high rate. Colonizes quickly; can reach densities of 500,000 individuals per square meter.

Monitoring and rapid response: Clean recreational equipment is crucial in preventing their spread. Chemical treatment using Bayer 73 copper sulfate, and 4-nitro-3trifluoromethylphenol sodium salt may be used in small lakes and ponds that are isolated from drainages. Credits: The information provided in this factsheet was gathered from the Global Invasive Species Database and the Michigan Department of Environmental Quality.