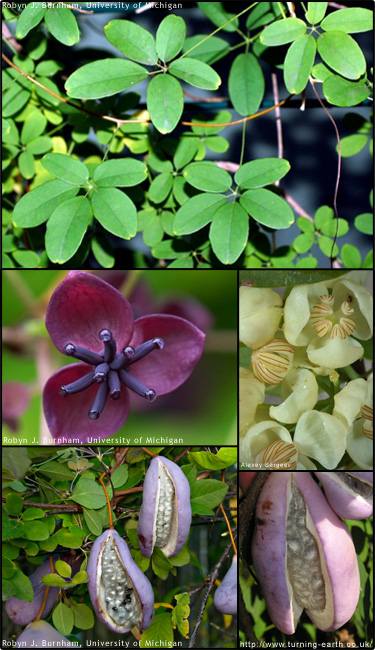 Description: First introduced into the United States in 1845 as an ornamental plant.

Habit: Deciduous to evergreen, woody perennial that grows either as a twining vine or a groundcover. Vines are green when young, turning to brown as it ages.

Leaves: Palmately compound with up to 5, 1.5-3 inch long, oval leaflets.

Stems: Slender, green when young and brown with maturity.

Flowers: Small, reddish to purple-brown in color, about 1 inch across and fragrant. Fragrance is said to be that of chocolate. Bloom in mid-Spring.

Fruit and seeds: Uncommon, large, soft, edible sausage-shaped pods about 2.25 to 4 inches in length, that ripen in late September to early October. Within the pod is a white fleshy core and many black seeds.

Reproduction: Spreads primarily by vegetative means and can grow 20-40 feet in one growing season. Flowers are monoecious (individual flowers are either male or female, but both sexes can be found on the same plant).

Impact and Damage: Dense mats can displace and kill native understory species. It can also climb into, smother, and kill small trees and shrubs. Once established, its dense growth prevents native seed germination and seedling establishment.

Similar species: Several species of Dutchman's pipe (Aristolochia spp.) resemble the Akebia genus, but distinguishing features have not been found.

Monitoring and rapid response: Small infestations can be controlled with repeated cutting throughout the growing season. Vines may also be dug up, removing as much of the roots as possible. For larger infestations, use of herbicide such as glyphosate or triclopyr. These herbicides can be used at any time of the year as long as air temps are between 50 and 85 degrees F. Credits: The information provided in this factsheet was gathered from the Global Invasive Species Database, Pennsylvania Department of Conservation and Natural Resources and the Plant Conservation Alliance's Alien Plant Working Group.