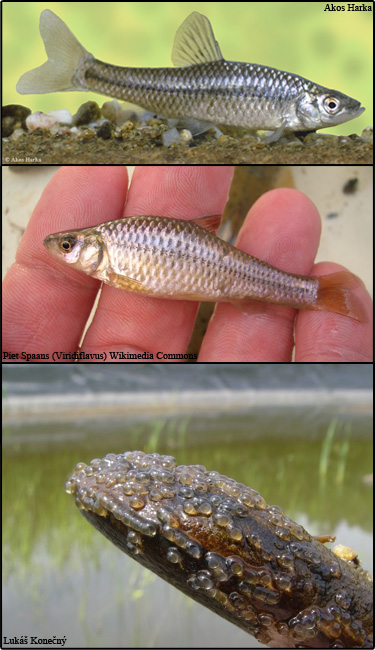 Description: Introduced into ponds in the 1960s throughout Europe. They are the carrier of a parasite (Sphaerothecum destruens) that can negatively impact native fish populations.

Reproduction: Spawning takes place at 1 year of age, requiring water temps of 60-66 degrees F. Females produce a few hundred to a few thousand eggs. Spawning can take place 3-4 times per season. Eggs are laid on plants, sand, stones, and mollusk shells which the female cleans prior to egg-laying. Several dozen eggs are laid at once and the males guard the eggs until they hatch.

Impact and Damage: Competes for food with native and farmed fish species, plus competition for space and spawning habitat. It is a vector of infectious diseases such as Spherotecum destruens, Anguillicola crassus and Clinostomum complanatum as well as a carrier of Pike Fry Rhabdovirus (PFR). It also consumes large amounts of zooplankton which results in an increase in phytoplankton abundance, and subsequent increase in eutrophication.

Monitoring and rapid response: One population in England was eradicated using rotenone. Credits: The information provided in this factsheet was gathered from the NNSS: GB Non-native Species Secretariat.