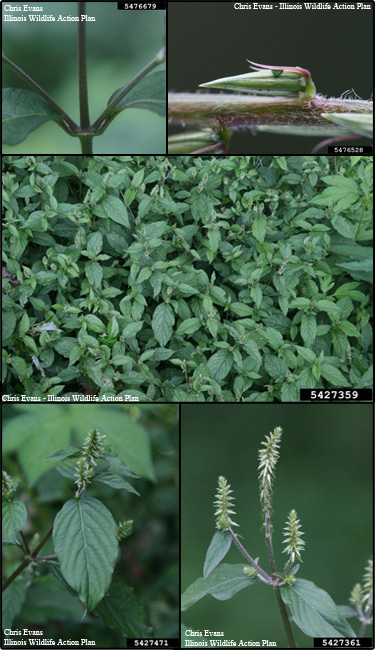 Description: First discovered in the United States in eastern Kentucky in the early 1980s.

Habit: Herbaceous perennial that can form dense colonies and grow up to 6.5 feet tall.

Stems: Slightly pubescent or glabrous, erect and growing up to 6.5 feet in height.

Flowers: Occur on tight clusters of erect spikes, blooming in late summer. Tiny flowers lack petals and they form at right angles from the spike.

Fruit and seeds: Fruits lay flat against elongated spikes that have a pair of stiff bracts that aid in attachment to cloths, shoes and animal fur. Seed maturation occurs in early fall.

Reproduction: By seed or vegetative by vigorous rhizomes.

Similar species: American lop seed (Phryma leptostachya), a common perennial forb of Wisconsin, especially when in fruit. American lop-seed can be best distinguished from Japanese chaff flower by its toothed leaves that come to an elongated point at the tip.

Monitoring and rapid response: Hand pull small infestations or newly germinated plants. Continuous monitoring is required due to vigorous root system. Remove plants before seed-set. Herbicide treatments may need to be conducted every 2 weeks with the use of glyphosate or triclopyr. Credits: The information provided in this factsheet was gathered from the Wisconsin Department of Natural Resources and the River to River Cooperative Weed Management Area Invasive Species Alert.