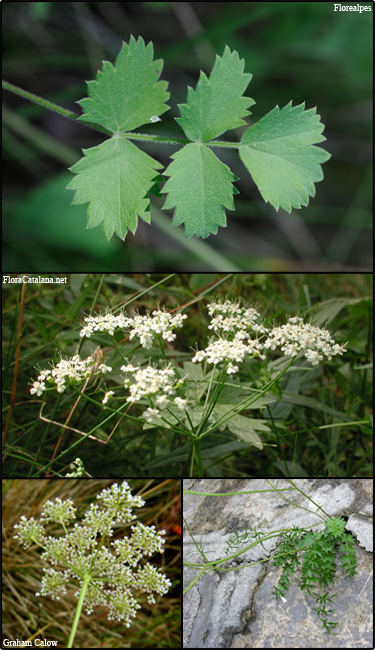 Leaves: Few and widely spaced, alternate, pinnately compound and variously covered in short hairs. Lowest leaves are up to 12 inches long, its leaflets oval to nearly round with large coarse teeth. Leaves become smaller as they ascend the stem becoming deeply lobed in the upper plant.

Flowers: Flat umbels made up of 7-20 umbellets of 10-20 flowers each. White, sometimes slightly pink in color and about 1/6 inch across with 5 petals. Creamy colored center and a pair of styles are present. Bases of umbels have no bracts, occasionally 1.

Fruit and seeds: Fruit is a flattened oval pod with faint ribs, less than 1/8 inch long and splits into 2 seeds.

Monitoring and rapid response: Hand pull plants, making sure to remove tap root. Mow plants before or during flower to prevent seed-set. Use of glyphosate is effective. Credits: The information provided in this factsheet was gathered from the Wisconsin Department of Natural Resources and Minnesota Wildflowers.