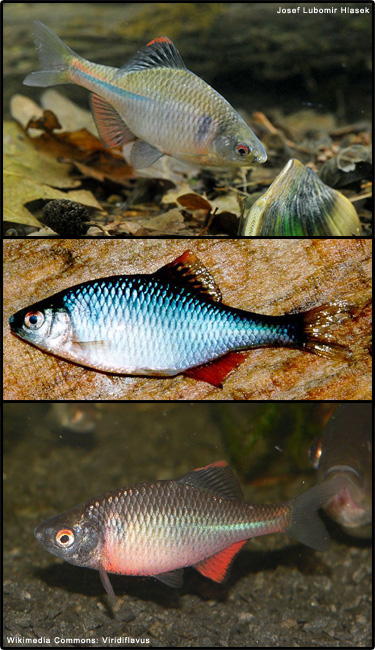 Identification: Small, average length is 6-7 cm. Grey-green back with silvery white sides and belly. Metallic streak on the hind end of the sides. Pale orange fins with gray shading. Mouth is oblique, inferior, or just terminal. Lower jaw is never longer than upper

Habitat: Native to areas of Europe from the Seine River in France to Asia Minor and northern China. Found in marshes, lakes, ponds, muddy/sandy pools, and backwaters of rivers.

Reproduction: Hides eggs in live invertebrates such as mussels, crabs or ascidians. Female develops a conduit ovipositor by which it deposits its ovules between the gills of a bivalve. Male then comes to deposit close to the respiratory opening of the bivalve; at the interior of which fertilization takes place. The young leave the mussel about 28 days after hatching, having reached a length of about 10 mm.

Impact and Damage: Bitterling need freshwater mussels to reproduce. Females lay their eggs between the gills of bivalves. The eggs are then fertilized by the male and hatch inside the live mussel. The fish rids the bivalve of parasites, resulting in a symbiotic relationship. Reported declines in bitterling populations in the Bronx River may be the results of a decline in populations of native freshwater mussels due to water pollution.

Credits: The information provided in this factsheet was gathered from the Michigan Department of Natural Resources and Fishbase.