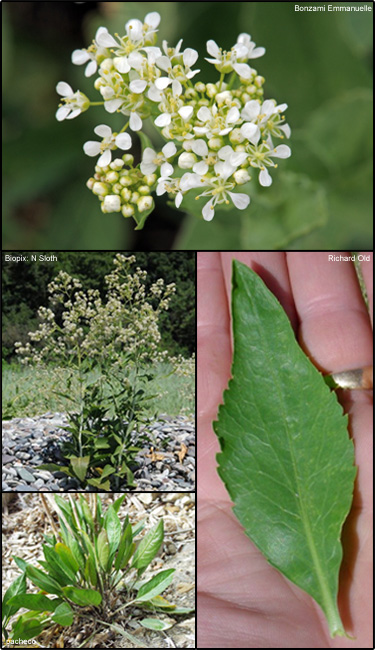 Description: Introduced to the United States possibly as a contaminant of sugar beet (beta vulgaris) seed imported from Europe.

Leaves: Lanceolate, bright green to gray green in color and entire or toothed. Basal leaves stalked, up to 1 ft. long and 3 in. wide with serrate margins. Size decreases up the stem.

Habitat: Native to western Asia and southeastern Europe. Can be found in coastal wetlands, riverbanks, marshes, rangelands and roadsides.

Reproduction: Mainly by clonal propagation from brittle rhizome-like roots that can grow up to 6 ft.

Impact and Damage: Can alter the ecosystem in which it grows including displacing native plants and animals, threatened and endangered species, decrease plant diversity, and reduce nesting frequency of waterfowl due to its dense, monospecific growing nature.

Monitoring and rapid response: Difficult to control. Mowing and disking are not recommened. Small patches can be controlled by hand removal if repeated often for several years. Foliar application of Telar (selective herbicide) or Roundup (nonselective glyphosate herbicide) have been effective. Also, several herbivorous insects feed on the plant (Lygus spp.) as well as a white rust (Albugo sp.) infects large numbers of flowers and limits seed production. Credits: The information provided in this factsheet was gathered from the U.S. Forest Service Weed of the Week 08-14-05.