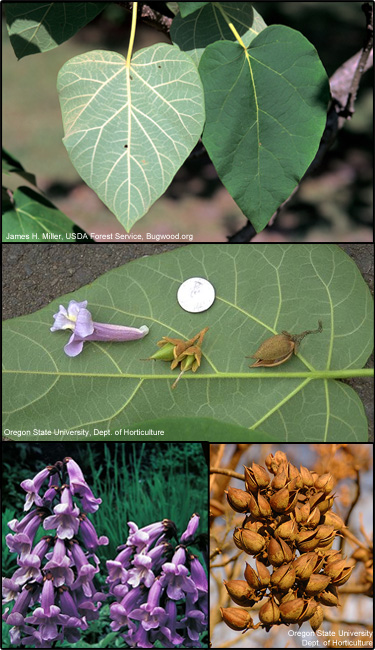 Description: Introduced to the United States as an ornamental in 1840.

Leaves: Opposite, simple, heart-shaped and large, 5-12 in. long, typically velvety, green above and paler below. Leaves on younger trees show course serrations or even lobes.

Habitat: Native to China. Can be found in forests, roadsides and stream banks.

Reproduction: By seed and sprouting.

Monitoring and rapid response: Control requires persistence due to strong sprouting ability, rapid growth and seed production. Cut mature trees to ground level at the onset of flowering. Girdling will kill the top of tree but sprouts are common and require follow-up treatment with foliar herbicide such as glyphosate or triclopyr. Credits: The information provided in this factsheet was gathered from Virginia Tech Dendrology, U.S. Forest Service FEIS PAUTOM, and the Invasive Plant Atlas of the United States.