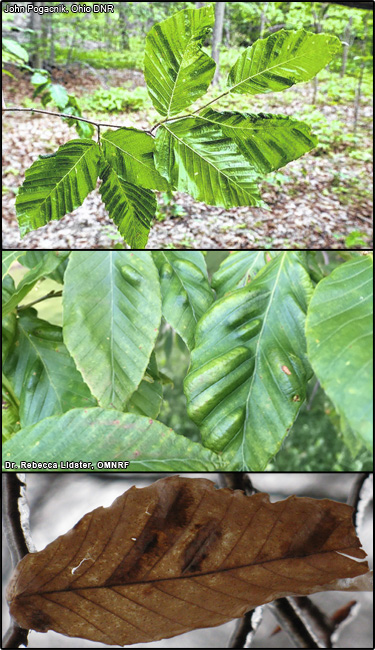 Description: Recently detected disease contributing to decline and mortality of beech as of October 2020, BLD has not been detected in Michigan, however, the disease has been confirmed near SE Michigan in southern Ontario as well as Ohio, northwestern Pennsylvania, New York, Connecticut, Massachusetts, New Jersey, and Rhode Island.

Identification: The disease is confirmed based on the symptoms (dark stripes or banding between leaf veins). Beech leaf curling aphids damage and Eryneum patch may look very similar. A nematode (microscopic worm) Litylenchus crenatae is associated with the symptoms. Ongoing research is investigating the possibility of other contributing microorganisms.

Impact and Damage: Symptoms of the disease include dark striping or banding between the leaf veins which is noticeable from below. It can also cause reduced leaf size as well as leaf thickening and/or puckering. As the disease progresses, heavily shriveled, discolored, deformed leaves cluster near the branch tips. Eventually, leaf and bud production is reduced. Buds that are produced are small and weakly attached. Observations in Ohio suggest sapling-sized trees may be killed within 2-5 years.

Credits: The information provided in this factsheet was gathered from the Ohio DNR Forest Health Pest Alert, The Ohio State University: Buckeye Yard & Garden online and the United States Department of Agriculture.