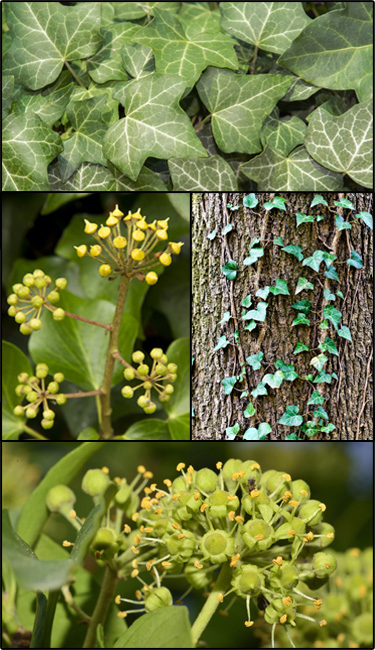 Description: Introduced to North America as an ornamental for ground cover. Compounds in English ivy are somewhat toxic and include glycosides that cause vomiting, diarrhea, nervous conditions and dermatitis in sensitive individuals.

Habit: Evergreen, climbs up to 90 ft by clinging aerial roots and trailing to form dense ground cover. Vines attach to the bark of trees, brickwork, and other surfaces by way of numerous, small root like structures, exuding a glue like substance.

Flowers: Perfect, small, greenish white in color, found in round clusters, appearing in the fall.

Fruit and seeds: Spring maturing, black in color with a fleshy outer covering, stone-like seeds, about 0.25 in. in diameter, poisonous.

Monitoring and rapid response: Pull up vines on the ground by hand then bag and dispose of plants; cut vines climbing on tree. Effectively controlled using any of several readily available general use herbicides such as triclopyr. Follow label and state requirements. Credits: The information provided in this factsheet was gathered from the U.S. Forest Service and Virginia Tech Department of Forest Resources and Environmental Conservation VTree.