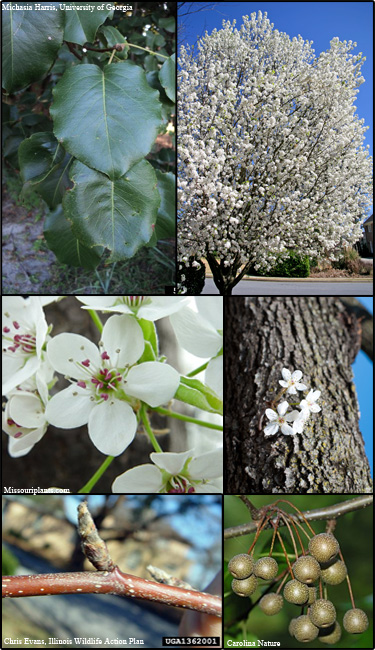 Description: Introduced to North America as an ornamental.

Habit: Deciduous, grows from 30-50 ft in height and 20-30 ft in width, overall shape of the tree is often described as a tear-drop with the trunk frequently splitting into many smaller branches.

Flowers: 5 petaled, white in color, occur early in the spring before leaves appear.

Fruit and seeds: Fruits are small, 0.5 in in length, round and green to brown in color and appear during late spring and summer.

Habitat: Native to China, Japan, Korea, Taiwan and Vietnam; grows well in full sun and partial shade and a variety of soil types and conditions including occasional wet soils or drought. Withstands the rigors of urban living, such as pollution and poor soil.

Reproduction: Vegetatively and by seeds that are dispersed to new locations by birds that eat the fruit.

Monitoring and rapid response: Seedlings and shallow-rooted plants can be pulled when soil is moist. Dig small trees up or pull out, ensuring removal of the root system. If cutting is not possible, trees can be girdled during the spring and summer, by cutting through the bark all around the trunk, about 6 in above the ground. Large trees should be cut down and stumps treated with an appropriate systemic herbicide such as glyphosate of triclopyr. Credits: The information provided in this factsheet was gathered from the U.S. Forest Service.