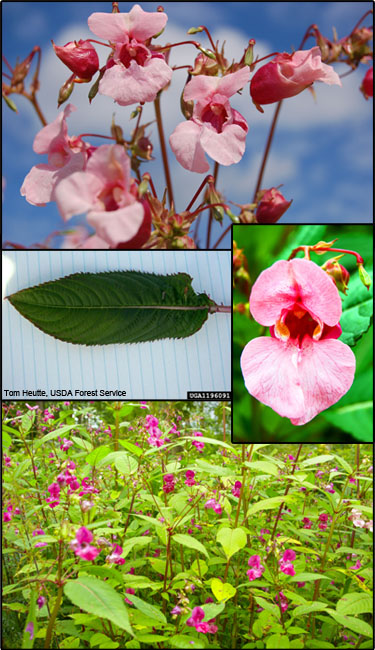 Description: Can be distinguished vegetatively from natives, which have alternate leaves. Sometimes referred to as "Indian" or "Himalayan balsam".

Leaves: Opposite to whorled (at least some of them), stalked, egg-shaped to elliptic, sharply and closely saw-toothed; 6-15 cm long.

Habitat: Native to the Himalayas. Found in moist habitats including stream and riverbanks, ditches, meadows, swamps and floodplain forests.

Reproduction: By abundant, explosive seed, which also spreads by water.

Monitoring and rapid response: Hand-pulling, mowing or cutting; effectively controlled using any of several readily available general use herbicides. Credits: The information provided in this factsheet was gathered from the Michigan Natural Features Inventory and the University of British Columbia.