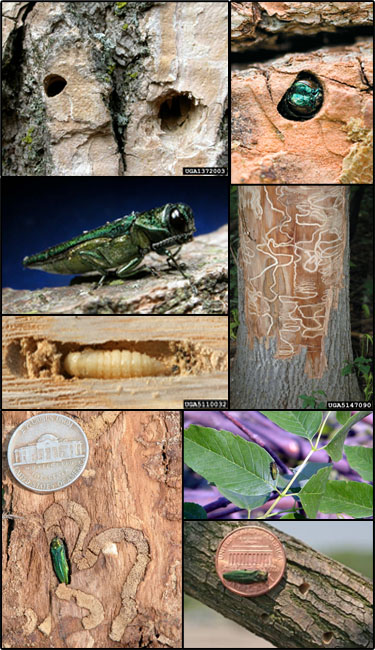 Description: Originally from Asia, was first discovered in July of 2002 in southeastern Michigan and Windsor, Ontario, Canada. So far, the distribution of the Emerald Ash Borer includes 35 states, the District of Columbia and five Canadian provinces. They were most likely brought to North America in infested solid wood packing materials.

Identification: Golden green or brassy color overall with darker, metallic emerald green wing covers. Adults measure 1/2 in (8.5-13 mm) in length. Females are larger than the males. Active from mid-May to late July. They feed on leaves, leaving irregular shaped patches with jagged edges. Larvae are flattened in appearance, consisting of 10 cream-colored, bell-shaped segments with a pair of brown pinchers at one end.

Life Cycle: May take 1 or 2 years to complete its life-cycle. Adult females may lay more than 100 eggs in a lifetime. Eggs are laid where the bark is rough, between bark layers or crevices. Eggs are 1.0 mm long by 0.6 mm wide and creamy white. Eggs hatch after 2 weeks.

Impact and Damage: S-shaped tunnels formed beneath the bark from larval feeding. Vertical splits in the bark. Adult emergence leaves D-shaped exit holes (3-4mm in diameter) in bark. Upper third of the tree dies back. Numerous shoots arise below the dead portion of the trunk.