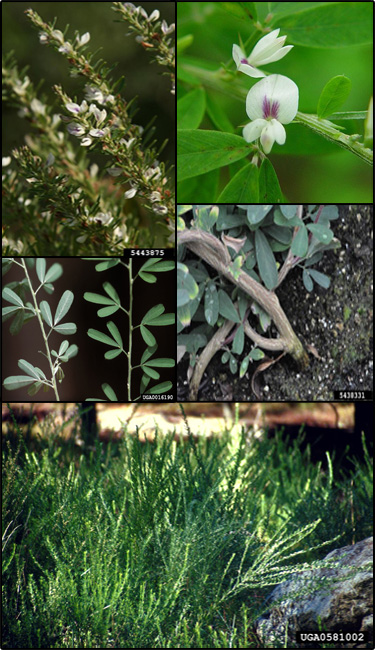 Description: Introduced to North America as forage and for hay production on poor soils, as well as erosion control. Extremely aggressive invader because of its large seed bank which stays viable for decades.

Stems: Erect; woody and fibrous when mature; covered with sharp, stuff flattened bristles; can reach a height of 3-6 ft (0.9-1.8 m).

Flowers: Small, about 1/4 in; creamy white to pale yellow in color with pink to purple colored veins; single or in clusters of 2-4, from the axils of the upper and median leaves; blooms late July through October.

Reproduction: By seed, which can remain viable for 20 years or more.

Similar species: Roundhead lespedeza (Lespedeza capitata) has much less branches and leaflets are longer and broader in size.

Monitoring and rapid response: Mow plants in the flower bud stage for 2-3 consecutive years, cut plants low to the ground; burning is not recommended as it can result in even more plants; can be effectively controlled using any of several readily available general use herbicides such as triclopyr, glyphosate, clopyralid, and metsulfuron methyl, in early to mid-summer. Follow label and state requirements. Credits: The information provided in this factsheet was gathered from the U.S. Forest Service.