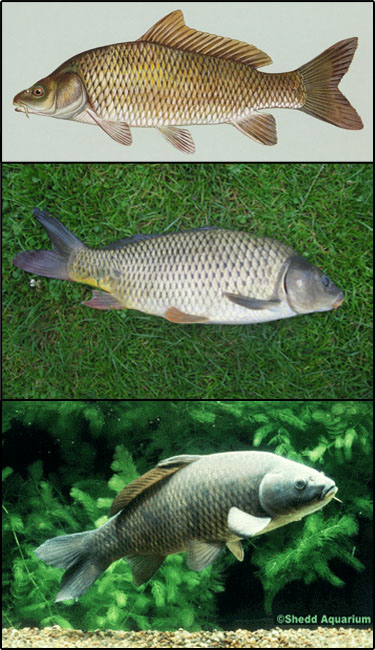 Description: First introduced to North America in the 1870s as a food and sport fish. Common carp are now widely distributed throughout southern Canada and most of the United States.

Habitat: Native to Asia and parts of Europe. Prefer warm, shallow, quiet and well-vegetated waters. Found in pools of small to large rivers as well as lakes and ponds.

Reproduction: They spawn from late spring to early summer in very shallow water at the edges of streams and lakes. Adults will energetically splash along the shore at this time. Spawning behavior often occurs in groups of one female and four to five males. Females release more than 50,000 eggs over submerged objects, and eggs take about 12 days to hatch. No parental care is provided to the eggs or fry.

Monitoring and rapid response: Common carp removal and control began in the 1950s. State programs to trap, seine, or poison the fish were frequent but often unsuccessful. State-regulated commercial fishing to control carp problems has been a favored control method since the 1980s. Control of this species continues to be a problem for many states. Credits: The information contained in this factsheet was provided by the Shedd Aquarium.

Photos (T-B) courtesy of the Maryland Department of Natural Resources, Wikipedia, and the Shedd Aquarium.