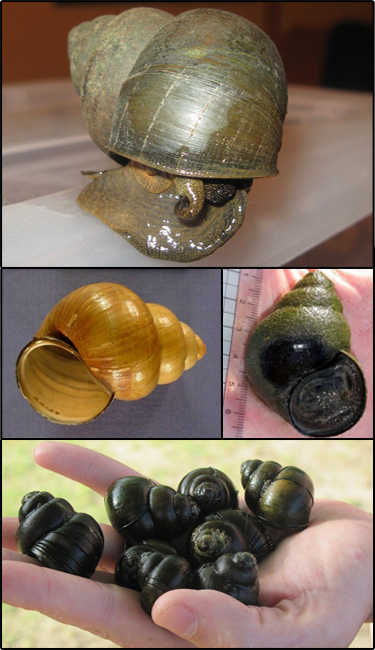 Description: Sold in Chinese food markets in San Francisco in the late 1800s; by 1965, established on both coasts; introduced into Great Lakes in 1940s.

Identification: Large (up to 2 1/4 inches); light brownish to olive green shell has 6-7 tightly wound whorls without banding; very fine growth rings; a round or oval black lip; camouflages itself with a dark green covering similar to moss.

Impact and Damage: May transmit parasites and diseases. Can also clog the screens of water-intake pipes. Achieves very high densities and adversely affects aquatic food webs. Competes with native snails for food and may contribute to their decline.

Monitoring and rapid response: Specific control methods have not yet been developed. Increasing the predator fishes and turtles that eat snails may be beneficial but snailicides and dessication (drying) has shown to be not effective. Credits: The information provided in this factsheet was gathered from the "Invaders of the Great Lakes" produced by Wildlife Forever and the Sea Grant Great Lakes Network along with the Wisconsin Dept. of Natural Resources.