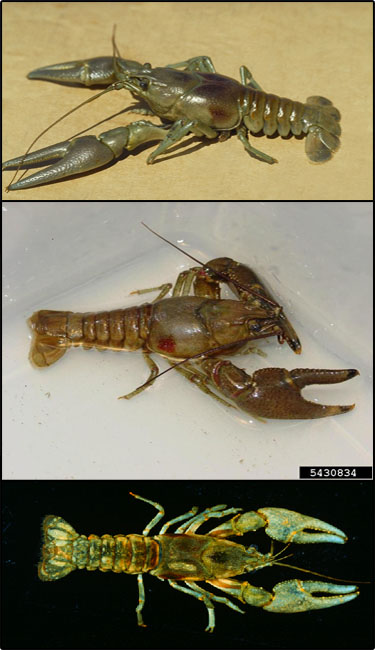 Description: First discovered in 1960s in Wisconsin and Minnesota.

Identification: Up to 6 inches (with claws); brown body; males often with dark rusty spots on each side (as though you picked it up with paint on your fingers); large, smooth grayish-green to reddish-brown claws with a black band at the tips, claws have an oval gap when closed; "S" - shaped movable claw.

Reproduction: Reproduces sexually and oviparously. Mating typically occurs in the fall and eggs are laid in the spring, but mating is reported to also occur in late summer, early spring. Males transfer sperm to the female who stores it until the eggs are laid, which usually occurs in the spring when water tempuratures rise. The eggs are externally fertilized by the female and attached to the swimmerets on the underside of the female's abdonmen. Females lay from 80-575 eggs. Since females store sperm, only one female carrying sperm is necessary to begin a new population.

Impact and Damage: Eliminate vegetation that provides cover for fish and habitat for invertebrates, an important food for fish and waterfowl. They also can harm native fish populations by eating their eggs and young. Eats twice as much as native crayfish and has the ability to hybridize with native crayfish.

Monitoring and rapid response: Eradicating established infestations is impossible. Do not use as bait outside the Ohio River drainage. Credits: The information provided in this factsheet was gathered from the "Invaders of the Great Lakes" produced by Wildlife Forever and the Sea Grant Great Lakes Network.