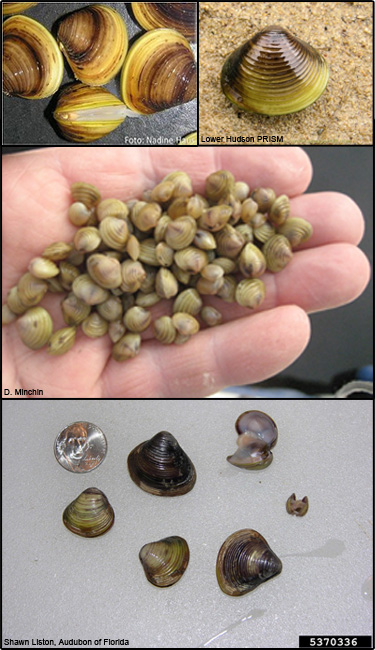 Description: First discovered in 1938 in Washington; intentionally introduced as a food item for humans and possibly released; by the 1970s, found its way into most of the Mississippi River Basin.

Reproduction: Hermaphrodite and capable of self-fertilization. Sperm is released into the water, caught by another clam, and brooded in the gills. The larvae are released through a siphon and sent out into the water. Spawning can continue year round in temperatures higher than 16 degrees Celsius. In North America, spawning occurs from spring to fall. Maximum densities can range from 10,000 to 20,000 per sq. m., and a single clam can release an average of 400 juveniles a day and up to 70,000 per year.

Impact and Damage: Large colonies can biofoul industrial and residential water-intake pipes. The high cost of removal ( more than $1 billion annually) is passed on to consumers. Intensive filter-feeders that sonsume the microscopic plants and animals that many juvenile fish require in order to survive. May dominate and displace the native bottom-dwelling species and algal blooms above the mussel bed.

Similar species: Sometimes confused with clams of the Sphaeriidae family.

Monitoring and rapid response: Boats and trailers could possibly be contaminated with adults or free-floating larvae. Be sure to check waders, hip boots, clothing and all fishing/scuba gear. Credits: The information provided in this factsheet was gathered from the "Invaders of the Great Lakes" produced by Wildlife Forever and the Sea Grant Great Lakes Network.