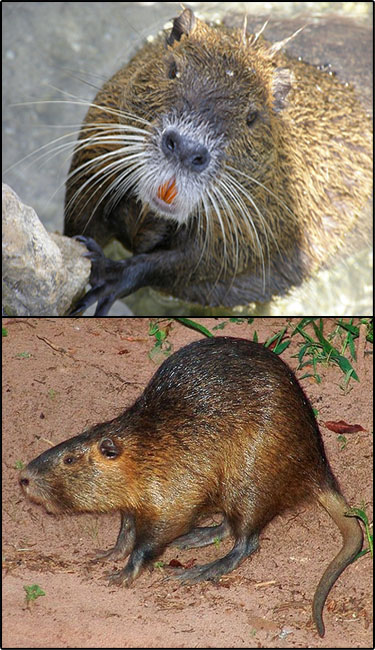 Description: It's name is derived from two Greek words; mys, for mouse, and kastor, for beaver.

Identification: Large rodent weighing an average of 12 pounds. Males are slightly larger then females. Their body length is 16-24 in with a 12-18 in tail. Coarse hair, dark brown in color with a soft dense grey under fur. They have a white patch on the muzzle, webbed hind feet and bright orange-yellow incisors.

Reproduction: Nutria breed year round and are extremely prolific. Males reach sexual maturity between 4 and 9 months, whereas, females reach sexual maturity between 3 and 9 months. The gestation period is 130 days, in one year and adult nutria can produce two litters and be pregnant for a third. The number of young in a litter ranges from 1-13 with an average of 4.5. Females can breed within a day of having a litter and litter size can depend on the age of the female, habitat quality and time of year. Young nutria at birth are fully furred and the eyes are open. Newborns feed on vegetation within hours and will nurse for 7-8 weeks.

Impact and Damage: Burrows can undermine the banks of rivers and dykes causing instability. Feeding on rhizomes and young shoots of marsh plants leads to plant community breakdown and can lead to erosion in coastal habitats. At high densities, nutria are able to convert marshland to open water. They can consume 25 percent of their weight daily. Habitat destruction threatens rare marshland species of birds, fish and invertebrates. Also feed on agricultural crops including sugarcane, alfalfa and root crops.

Monitoring and rapid response: Feral populations of nutria are managed by shooting and trapping. Eradication is preferable for small to medium size populations but some level of control is essential in most cases if eradication is not feasible. High fur prices encourage sufficient hunting to control populations. Some states have also established a bounty system for nutria. Credits: The information provided in this factsheet was gathered from the Global Invasive Species Database and from Nutria.com