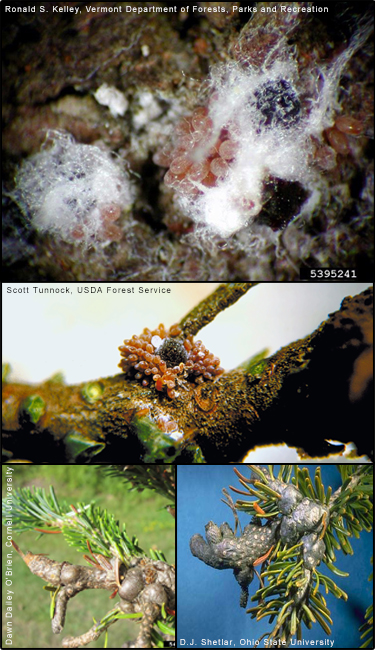 Description: Introduced to North America from Europe around 1900. First noticed in Maine in 1908 and later appearing on the West Coast and Southeastern United States in the mid 1950?s. Infested nursery stock is the presumed source of introduction. So far, 95% of all Fraser firs have been killed by this insect.

Identification: Small (about 1 mm long), dark purple to black in color, nearly spherical and wingless. They produce a thick mass of waxy wool-like material that covers the body and protects the adult and her eggs.

Life Cycle: Females lay 100-250 amber colored eggs under a thick wool-like coat. An amber colored crawler hatches from the egg and is the only stage capable of directed movement. They normally have 2-4 generations per year, depending on their location and elevation. Spring development begins in late April or early May. Adults of the second generation become abundant in late Sept. and early Oct., and egg laying continues until about mid- Nov.

Impact and Damage: A serious pest of forest, seed production, landscape and Christmas trees. Secretes an irritating salivary substance, which is injected into the host tree as the insect feeds. This substance causes unusual growth, such as swelling or ?gouting? which distorts the tree?s normal growth pattern. A heavy stem attack may kill an otherwise healthy tree in 3-4 years. As the tree dies, portions of the crown or the entire crown will turn red. The wood of heavily infested trees become darkened and brittle.

Monitoring and rapid response: Three beetles; Laricobius erichsonii, Pullus impexus, and Aphidecta obliterata; and 3 flies: Aphidoletes thompsoni Mohn, Cremifania nigrocellulata, and Leucopis obscura Haliday appear to feed on stages of balsam woolly adelgid. Only adelgids below the snowline will survive temps below 30 degrees F. Spraying individual trees at the ground with an approved insecticide has proved effective when the crawler is exposed and applied as a bark drench with a hydraulic sprayer in May-Jun and Sept-Oct. Credits: The information provided in this factsheet was gathered from the Michigan Department of Natural Resources and the U.S Department of Agriculture: Forest Insect and Disease Leaflet 118.