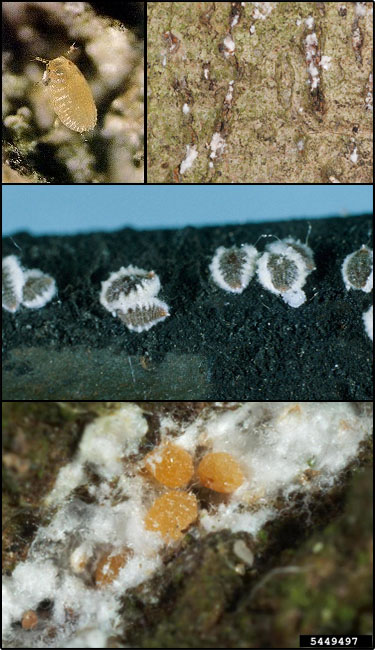 Description: Beech scale insects along with the neonectria fungus form the disease complex responsible for beech bark disease. Beech scale was introduced to Canada during the late 1800s, first appeared in the U.S. during the 1930s.

Identification: Yellow, soft-bodied, elliptical, 0.5 to 1.0 mm long as adults. Adult scales are legless and wingless and have only rudimentary antennae. They attach to trees only by their 2 mm long stylets. Nymphs possess glands that secrete a white, woolly wax that covers their bodies, and causes heavily infested trees to appear as though they are covered by white wool. They have no filament.

Life Cycle: All female and 1 generation a year. They lay pale yellow eggs on the bark in midsummer, and die. Eggs are attached end-to-end in strings of 4-7 eggs. Eggs hatch late summer until early winter. Immature scales are called crawlers or nymphs. Crawlers can move and have functional antennae. Once a crawler begins to feed, it will molt to a 2nd stage which are immobile. They produce the white wax that covers their bodies. These crawlers overwinter and molt to the adult stage the following spring.

Impact and Damage: Feed on sap in the inner bark of the American (Fagus grandifolia) and European beech (Fagus sylvatica) trees, producing minute wounds and injuries.

Monitoring and rapid response: Can be removed by scrubbing a tree with a soft brush, using water from a high pressure nozzle. Normant and horticultural oils are petroleum-based products that cover and suffocate soft-bodied insects such as aphids, spider mites and scales. Currently no effective insecticides have been found. Credits: The information provided in this factsheet was gathered from Global Invasive Species Database.