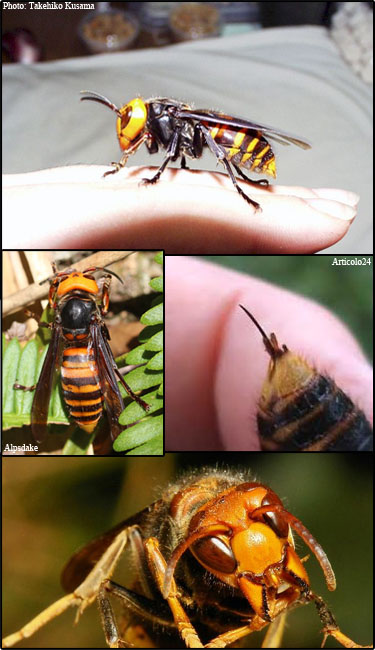 Identification: Adults grow to 4.5 cm long and queens can reach 5.5 cm long. The head is light orange and its antennae are brown with a yellow-orange base. The thorax is dark brown, with 2 grey wings varying from 3.5 to 7.6 cm. Abdomen alternates between dark-brown or black and a yellow-orange color. Sixth segment is yellow and its stinger is up to 0.25 inches long. The stinger contains venom that can kill a human with a high enough dosage. Its orange mandible contains a black tooth that is used for digging.

Life Cycle: Nesting cycle goes through 3 periods; pre-nesting period, solitary, cooperative and polyethic period, and dissolution and hibernating period. Inseminated queens start to search for nesting sites in late April. Early August marks a fully developed nest, containing 3 combs holding 500 cells and 100 workers. After mid September, no more eggs are laid and focus shifts to caring for larvae. Queens die sometime between mid to late October. Nests have approximately 4-7 combs and can reach a diameter of 49.5 cm by 45.5 cm with 1,192 cells and 61.0 cm by 48.0 cm.

Monitoring and rapid response: Crushing hornets with wooden sticks with a flat head has been effective but inefficient. Applying poisons or fires at night to the nest is effective in exterminating colony. Bait traps placed in apiaries can be effective. Mass poisoning in which a hornet is captured and fed a sugar solution, dead bee or hornet that has been poisoned with diluted lead arsenate, malathon or other poison. Trapping at hive entrances in which a trap is attached to the front of hives. Credits: The information provided in this factsheet was gathered from the Bionomic Sketch of the Giant Hornet, Vespa mandarinia, a Serious Pest for Japanese Apiculture and Animalias.com.