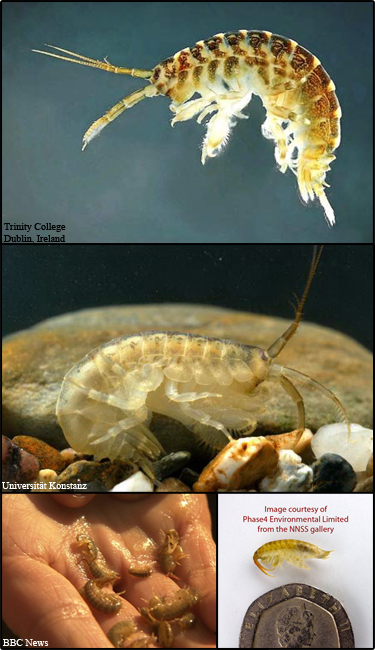 Identification: Fast growing, laterally compressed, curled and semi-transparent. Can grow up to 30mm., which is large for a freshwater amphipod. Body consists of a head, thorax and abdomen. May appear striped or uniform in coloration pattern, mandibles are relatively large and can exhibit vicious and destructive behavior.

Habitat: Native to the Ponto-Caspian region of Europe. Prefers fresh and brackish waters such as lakes rivers and canals.

Reproduction: Can breed all year round so long as the water temps are about 55 degrees F. During mating, males carry females on back. Females can carry 50 eggs and releases them into a ventrail brood chamber. Populations are predominantly female.

Impact and Damage: Voracious predator of macroinvertebrates, including other amphipods.

Monitoring and rapid response: Mandatory ballast control, shoreside treatment plants, where ship ballast water could be unloaded, treated, and safely released. Filtration systems and chemical use for ship ballast are also options. Credits: The information provided in this factsheet was gathered from the U.S Army Corps of Engineers.