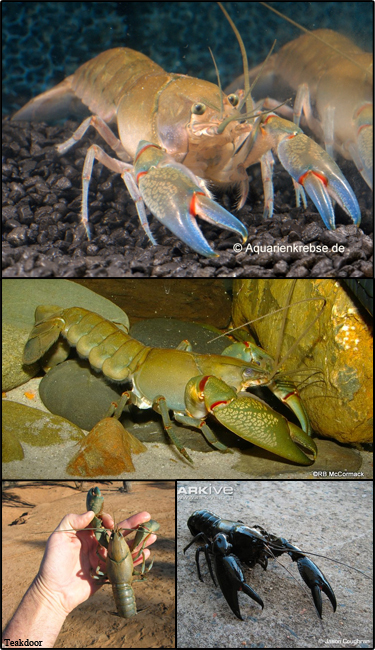 Identification: Smooth-shelled and varies in color from olive-green to brown, but can also be blue, yellow, red or black depending on the habitat. Can reach a length of 4-8 inches. It possess broad, spade-like claws; a short, smooth rostrum (spine between eyes) and are vigorous burrowers.

Habitat: Native to Australia. It prefers swamps, streams, rivers and reservoirs. May be found in bodies of water that dry up seasonally where they can survive for long periods of time lying dormant in deep burros in the mud or substrate.

Reproduction: Females can produce up to 1000 eggs per spawning when fully grown. Females will spawn twice or more each season. Eggs are small, oval and green in color and take 19-40 days to hatch.

Impact and Damage: Potential crayfish plague vector and a vector for Thelohania parastaci. Omnivorous, feeding primarily on rotting vegetation, but is somewhat opportunistic, eating anything it comes across, including other yabbie crayfish. Can destroy integrity of dam walls due to burrows.

Similar species: Australian red claw crayfish (Cherax quadricarinatus) and C. tenuimanus by its simple rostrum with borders not spinous or raised or extended into keels.

Monitoring and rapid response: Two populations in Spain have been eradicated using crayfish plague. This species is common in aquaculture and is gaining popularity as an aquarium species. Credits: The information provided in this factsheet was gathered from the U.S Fish and Wildlife Services and CABI.