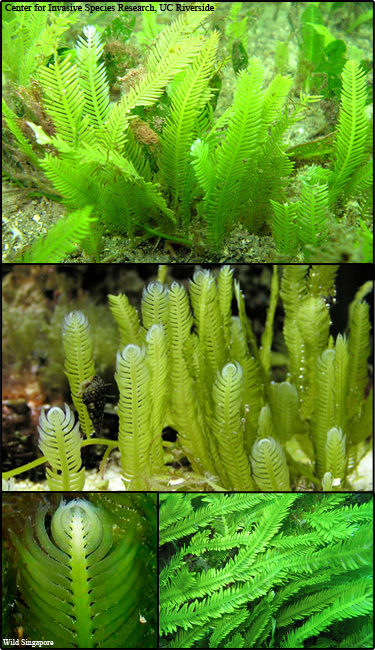 Description: Widely used as a decorative aquarium plant in the 1980s and was first observed in the Mediterranean Sea in 1984.

Leaves: Feather-like "leaf blades" called fronds which have a relatively wide central axis (rachis) from which grow many pinnules. Primary fronds grow directly on the stolons at regularly spaced intervals;may be quite short or even absent in shallow water, becoming long in deeper water in low light. Primary fronds are 2-15 cm long. Pinnules are up to 1 cm long, number 4-7 per cm along each side of the frond axis, usually upcurved and tapering at the ends.

Stems: Stolons bear the fronds and the rhizoids. Stolon length tends to be around 220 mm

Habitat: Native to the tropical oceans and seas of the world including Australia, Brazil, Ceylon, Indonesia, Philippines, Tanzania and Vietnam. Found on a wide variety of substrates from rock, sand and mud to sea grasses. Usually at a depth of 3-35 m, but has been recorded at depths down to 100 meters.

Reproduction: Vegetatively via stolons or fragments.

Impact and Damage: Can form dense monocultures that can smother other algal species, sea grasses and sessile invertebrate communities.

Monitoring and rapid response: Covering colonies with black PVC plastic was found to be reasonable successful in Croatia. The use of a suction pump to remove all fragments has also shown moderate success. Credits: The information provided in this factsheet was gathered from the Global Invasive Species Database and The University of Florida's Center for Aquatic and Invasive Plants.