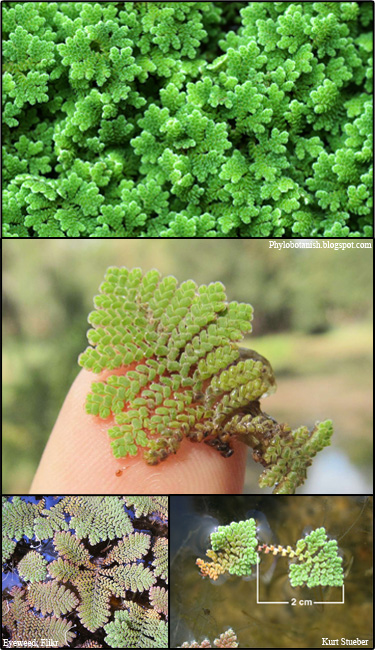 Habit: Small fern with a triangular frond that measures up to 1 inch in length and floats on the water.

Leaves: The frond is made up of many rounded or angular overlapping leaves each 0.08 in long. Green, blue-green or dark red in color and coated with tiny hairs, giving them a velvety appearance. The hairs make the top surface of the leaf water-repellent, allowing the plant to float.

Fruit and seeds: A small fruit capsule appears and can contain up to 64 small spores.

Habitat: Native to Africa and Madagascar, India, Southeast Asia, China and Japan, Malaya and the Philippines, the New Guinea mainland and Australia. Found on moist soil in and around rivers, ditches, and ponds.

Reproduction: Generally reproduces vegetatively, and by spores. Capable of doubling its biomass in 5-10 days.

Monitoring and rapid response: There has been success in controling Azolla with the use of weevils. Credits: The information provided in this factsheet was gathered from the Invasive.org Bugwood Wiki and the Global Invasive Species Database.