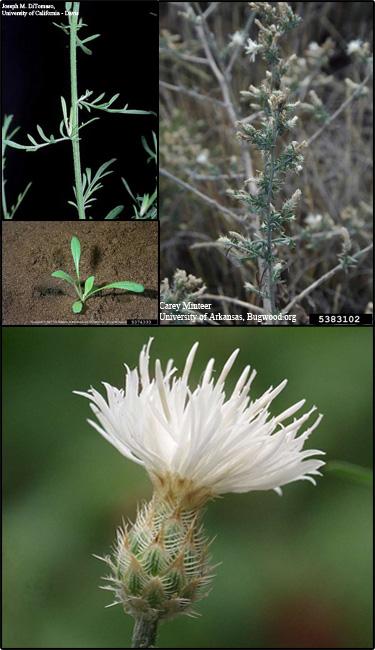 Description: Introduced in the early 1900s as a contaminant of alfalfa seed.

Leaves: Finely divided and alternate. May have a gray appearance due to tiny fine hairs.

Flowers: Usually white in color, sometimes pinkish to purple and form at the tip of branches. Bracts contain multiple lateral spines and one prominent terminal spine.

Fruit and seeds: Seed heads are urn-shaped, with many seeds compact in the flower head. Nodding flower head gives the plant its mobility, turning into "tumbleweed" when flowering stalks break off facilitating seed transport over long distances. Plants can produce over a thousand seeds per plant. Seeds to not have pappus, the parachute-like structure that aids in dispersal.

Monitoring and rapid response: For smaller infestations, hand pulling can be effective, removing as much of the tap root as possible. Mowing during flower stage is effective in preventing seed production. Tilling at a depth of 7 inches followed by dense reseeding of native species can help prevent reinvasion. Prescribed fire alone is not effective. Herbicide treatments most effective when combined with other control techniques. Credits: The information provided in this factsheet was gathered from the Wisconsin Department of Natural Resources and the IVM Technical Bulletin on Spotted, Diffuse & Russian knapweed.