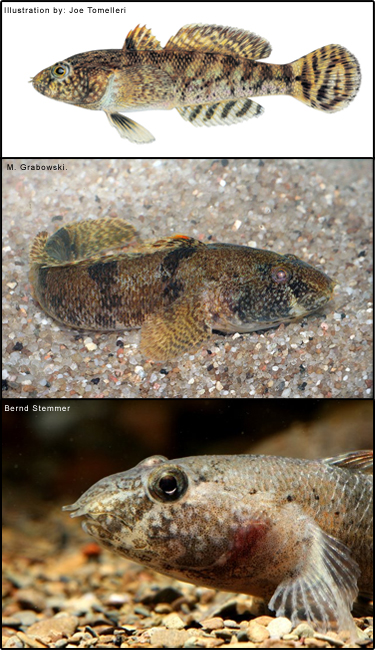 Description: Introduced to the Great Lakes in ballast water; first detected in the St. Clair River in 1990; not dispersed as widely as the round goby.

Reproduction: Males guard nesting sites to defend the eggs and young. Spawn multiple times during the warmer months of the years and are rather prolific.

Impact and Damage: Compete with, and prey upon, native bottom-dwelling fish. Their preferred habitat impacts the spawning grounds and nurseries of native fish species. They eat fish larvae and fish eggs and will compete with native fish for food, feeing on invertebrates, insect nymphs and small crustaceans.

Similar species: Sculpin and other native species have a pair of pelvic fins; the round goby is the only other invasive with a single fused pelvic fin.

Monitoring and rapid response: No known biological control methods. USACE notes the potential effectiveness of acoustic or sensory fish deterrents. Increasing CO2 concentrations can be used as a potential method of harvesting fish for removal as it will sedate the fish. Credits: The information provided in this factsheet was gathered from "Invaders of the Great Lakes" produced by Wildlife Forever, the Sea Grant Great Lakes Network and the Ohio DNR.