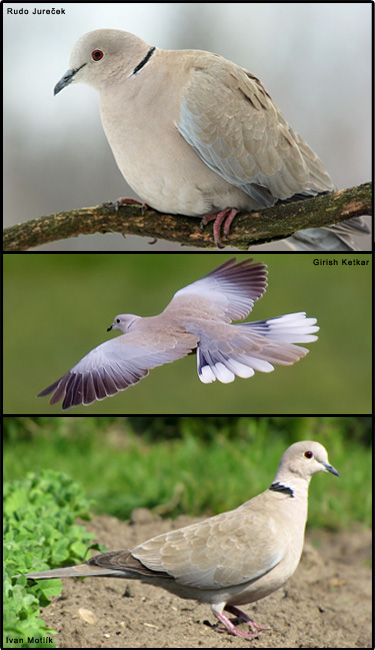 Description: Introduced to the United States via dispersal of young individuals over long distances.

Identification: Mostly gray with white upper body, black collar on the back of its neck, slender black bill, deep red iris of the eye; broad, squared tail with black base and dark red legs and feet.

Habitat: Native to Asia, Europe and Northern Africa. Found on farmlands, open country, and wood edges in suburban and urban areas. They appear to thrive in areas with a combination of open ground and trees.

Similar species: Mourning dove, which is smaller in overall size, no black collar, blue ring around eyes, black spots on back, pointed tail.

Monitoring and rapid response: Hunting can be effective in managing their population. Credits: The information provided in this factsheet was gathered from Michigan Department of Natural Resources.