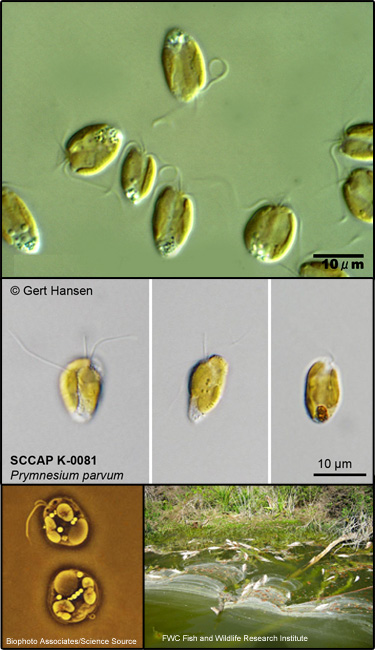 Description: First introduced to North America in 1985 with an unknown origin. Extremely toxic .

Habit: Microscopic (about 10 micrometer), flagellated alga with 4 morphologically distinct forms. Two forms are bi-flagellated haploid cell types. One form is a bi-flagellated diploid cell type. Another is a non-motile with no flagella (resting stage). Flagellated forms have a haptonema, specialized external needle-like structures that enables attachment to surfaces. They have 2 saddle shaped chloroplasts that are yellow-green to olive in color. Flagella range from 12-15 micrometers and haptonema ranges from 3-5 micrometers.

Habitat: Found worldwide and often associated with estuarine or marine waters as well as brackish ponds.

Impact and Damage: Capable of forming harmful blooms inland and in coastal aquatic environments and is responsible for devastating fish kills.

Monitoring and rapid response: Landscape-scale reductions in nutrient load and hydrologic changes would be required for management of P. parvum blooms. Reduction of ammonium sulfate and other agricultural fertilizers is necessary. Credits: The information provided in this factsheet was gathered from CABI: Invasive Species Compendium.