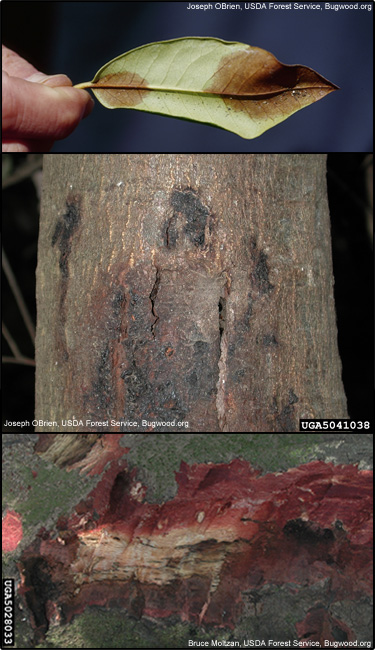 Description: First observed in 1993 in Germany and The Netherlands on ornamental rhododendrons and viburnum. In North American, it was first reported in 1995 in Mill Valley (Marin County, CA) on tanoaks.

Identification: A water borne mold that causes two types of diseases, bark cankers that may kill the host and foliar blights that may serve as a reservoir for the pathogen.

Habitat: Currently there are 31 plant species that are considered hosts and another 37 awaiting experimental confirmation.

Impact and Damage: Bark cankers cause droplets of dark reddish brown liquid to appear on the bark ("bleeding"). This canker can girdle the tree and cause the leaves to turn brown and eventually the entire crown dies. Tree death occurs within several months or several years after initial infection. Infected trees are attractive to Monarthrum scutellar and M. dentiger and bark beetles.

Credits: The information provided in this factsheet was gathered from the USDA APHIS National Pest Alert.