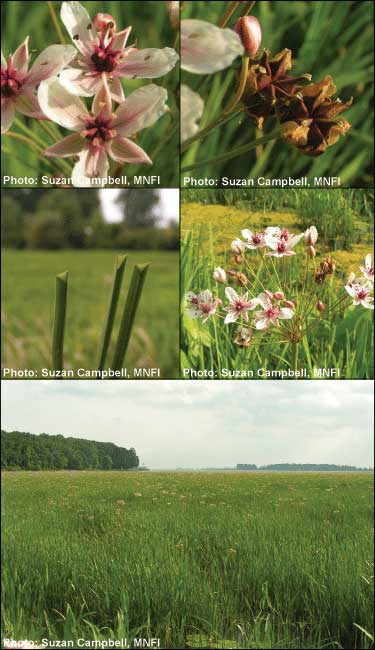 Description: This species is listed as a restricted noxious weed by the Michigan Department of Agriculture. Flowering rush occurred in the Detroit River as early as 1918 but has become a much greater problem in recent years.

Habit: Perennial, erect, floating or submersed in water up to 2 m (6 ft) deep.

Flowers: Pale pink, rose or white in color; 3 petals and 3 petal-like sepals, held in a many-flowered, rounded cluster with 3 bracts; held at the top of the stem, not all populations produce flowers although many in Michigan do.

Fruit and seeds: Fruit a beaked follicle, not all populations produce fertile seed but at least some Michigan populations do so.

Habitat: Native to Eurasia. Found in rivers, lakes, emergent wetlands and ditches in waters up to 3 m (~10 ft) in depth.

Reproduction: By stout creeping rhizomes, vegetative bulbils that form in rhizome axils, some populations produce fertile seed also, seeds float and are water-dispersed, seeds, like those of many wetland species are long-lived.

Similar species: Non-flowering specimens may resemble young bur-reeds (Sparganium spp.) or bulrushes (Scirppus spp.) as they may have similar leaves.

Monitoring and rapid response: Monitor lake shores, stream banks and ditches, particular where water levels have dropped; plant is identifiable in summer when fruit or seed are present. Cutting flowering rush under water may reduce population density, remove all plant parts; digging out isolated plants may prevent spread but bulbils on rhizomes must be removed also, do not compost near wetlands or water; control with herbicide difficult. Permits are usually required for herbicide use in water bodies and wetlands. For information see MDEQs Aquatic Nuisance Control website at: https://www.michigan.gov/egle/0,9429,7-135-3313_3681_3710---,00.html Credits: The Michigan Natural Features Inventory (MNFI) has partnered with MISIN to provide the information in this fact sheet. Species images and/or information were used with permission from "A Field Identification Guide to Invasive Plants in Michigan's Natural Communities" and "A Field Guide to Invasive Plants of Aquatic and Wetland Habitats for Michigan.