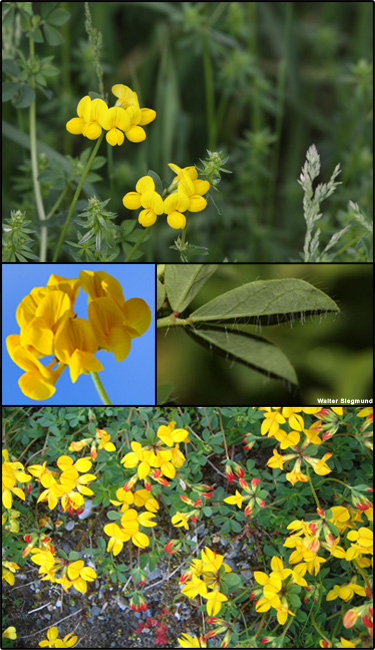 Description: Used in agriculture as a forage plant, grown for pasture, hay, and silage.

Leaves: Clover-like, pinnately compound, alternate, and consist of three oval leaflets and two smaller leaflet-like stipules that grow at the base of the leaf stalk.

Stems: Erect, nearly square, emerge from a single root crown and have many branches that can become tangled and matted.

Flowers: Bright yellow in color, sometimes streaked with red, 0.5 in long, borne in flat-topped clusters of 3-6 at the end of stems; blooms from June to frost.

Fruit and seeds: Seeds are in clusters, brown to black in color, slender, cylindrical, resembles a bird's foot and contains 10-20 seeds that eject when mature.

Reproduction: By seeds, rhizomes and above ground runners that form fibrous mats.

Monitoring and rapid response: Dig up small infestations, removing all root fragments; frequent mowing at a height of 2 in for several years; effectively controlled by any of the several readily available general use herbicides such as clopyralid, glyphosate, or triclopyr. Natural enemies include one fungal associate, Erysiphe betae, several species of arthropods and six lepidopterans. Credits: The information provided in this factsheet was gathered from the U.S. Forest Service.