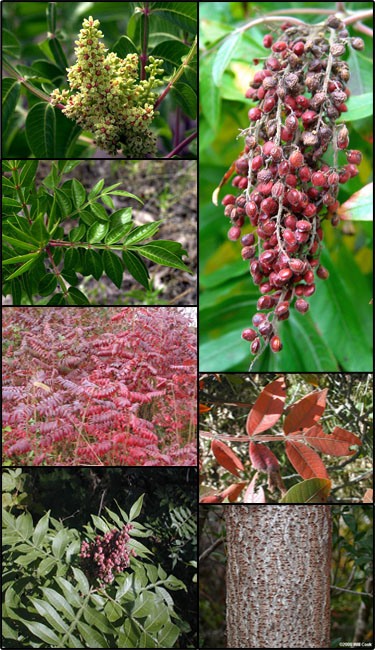 Description: Introduced as an ornamental. It also has medicinal uses for skin rashes, dysentery, mouth sores and sunburn. It's bark is also widely used in the tanning industry.

Leaves: Alternate, pinnately compound, up to 12 in long, 7-15 leaflets per leaf, leaflets are lance-shaped with entire margins, rachis has prominent wings between the leaflets, shiny, dark green above, paler and a bit fuzzy below.

Flowers: Monoecious, greenish-yellow and small, borne on 3-5 in wide, terminal pyramid-shaped panicles; blooms May through November.

Fruit and seeds: Dark red in color, round drupe borne on terminal cluster, 1/8 in long, covered with short, sticky, red hairs; matures in fall but present through winter.

Monitoring and rapid response: Hand-pulling for small infestations, controlled fire, basal bark treatments; effectively controlled using any of the several readily available general use herbicides such as triclopyr (Trade name Garlon). Credits: The information provided in this factsheet was gathered from the Virginia Tech Department of Forest Resources and Environmental Conservation VTree.