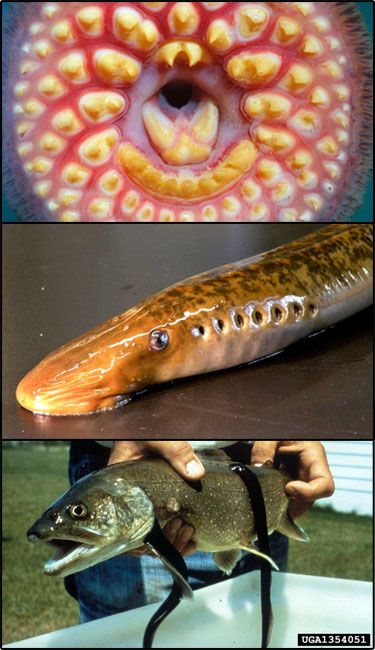 Description: Introduced to the Great Lakes through shipping canals around 1919; by 1939 had spread to all five Great Lakes.

Identification: Blue-gray to olive-brown back, sides and fins with black marbling. Long and lean eel-like body with two dorsal fins. Expanded oral disc as wide as or wider than head with large, sharp disk teeth and sucking mouth. Seven paired gill openings. On average 24 inches, can grow up to 45 inches.

Habitat: Native to eastern and western North Atlantic Ocean and the western Mediterranean Sea. Individuals with access to ocean are anadromous. Juveniles live in quiet pools or freshwater streams; adults are free-swimming in lakes or oceans.

Reproduction: Sea lampreys have a multi-stage life cycle that lasts several years. Adults build nests in the gravel of a clear stream, then die shortly after spawning. Their young remain in the stream several years before returning to the lake as adults.

Impact and Damage: They attach to the side of a fish with a suction-cup like mouth, piercing the host's flesh and consuming blood and body fluids. They can severely weaken it fish, which can led to death. Harmful to native fishes that are on average smaller than ocean fishes and are more easily weakened or killed by a sea lamprey. Lake trout are the primary hosts, and fewer than one in seven lake trout survive. They have led to the decline of several native fish populations, including whitefish and lake trout.

Monitoring and rapid response: Several control techniques have been used to target sea lampreys at different life stages. More than 180 Great Lakes streams are treated regularly with lampricides that destroy the sea lamprey larvae but do not cause significant harm to other aquatic species. Barriers are also used to catch adult lampreys that are swimming upstream to spawn. Sterilization programs have also been fairly successful in reducing sea lamprey populations. Credits: The information contained in this factsheet was provided by the Shedd Aquarium.

Photos courtesy of the Michigan Sea Grant, Naturaleza Insolita, and the U.S Fish and Wildlife Service.