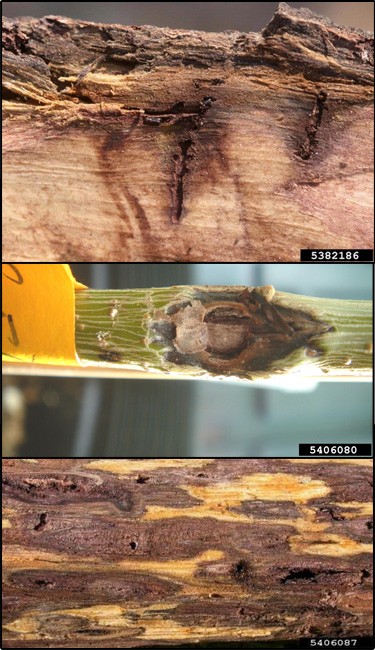 Description: Native to the western United States and primarily affects black walnut Juglans nigra. The disease was first recognized until 2008 in Colorado while the pathogen, Geosmithia morbida, was not scientifically described until 2011. Possibly spread by the transportation of firewood and logs.

Identification: Off-white to buff in culture; not known to be plant pathogens; no sexual state known; yeast like phase; always found in association with the walnut twig beetle, frass, and galleries. Transmitted by the walnut twig beetle (Pityophthorus juglandis). Fungal spores are carried and introduced into the tree by the only known pathogen, adult walnut twig beetles during egg gallery construction.

Impact and Damage: Early symptoms of the fungus include yellowing leaves and thinning of the tree crown, followed by the foliage wilting and larger branches begin to die. The disease can kill trees within 3 years due to the coalescing of many cankers that form around every twig beetle feeding site. They are circular to oblong in shape and found in the phloem under the bark. This eventually kills the phloem and cambium tissue surrounding the gallery.

Monitoring and rapid response: Once the fungus has colonized the host tissue, it will continue to grow, and systemic and contact insecticides targeting the beetle do not prevent the progress of the disease. Prevention of the walnut twig beetle is essential to the early detection and rapid response to this disease. Credits: The information provided in this factsheet was gathered from the Bugwood Wiki, Michigan Department of Natural Resources, U.S Department of Agriculture, and the Utah Pests Fact Sheet (Utah State University Cooperative Extension)