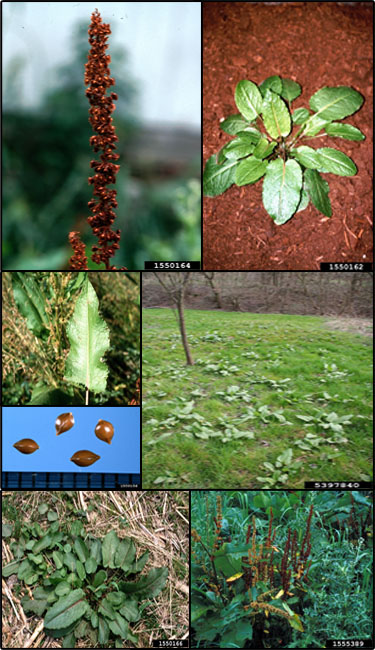 Description: Grows rapidly in areas dominated by native species; Host to a number of viruses, fungus and nematodes.

Leaves: Lower with heart-shaped base, oblong to oval, up to 6 in wide, upper much smaller, blade oblong to ovate-oblong, sometimes broadly ovate; 20-40 by 10-15 cm, usually less than 4 times as long as wide.

Habitat: Native to Eurasia and Asia. Found in disturbed areas; pastures, river banks and open moist places, and a major weed of gardens and arable land; stockyards, cowsheds and other places with very high nitrogen levels.

Similar species: Other dock species (Rumex spp.) but can be distinguished by its shiny leaves, which are broad, well-rounded or cordate at the base and crisped along the margins.

Monitoring and rapid response: Monitor farm land and disturbed areas. Credits: The information provided in this factsheet was gathered from the USDA PLANTS Database and the U.S. Forest Service.