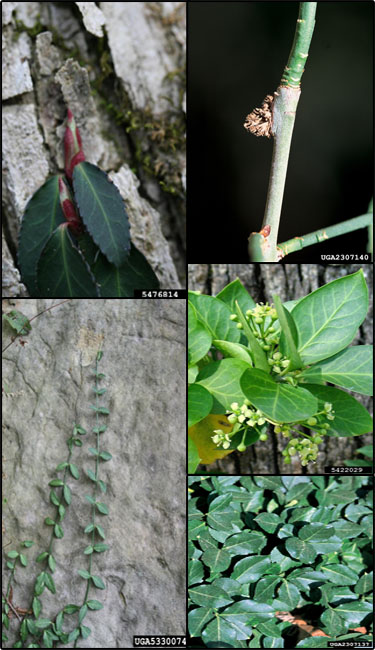 Description: Introduced as an ornamental groundcover.

Stems: Narrow, warty and have rootlets or trailing roots.

Reproduction: Spreads vegetatively with the help of lateral shoots produced along its long main branches and by new plants that emerge from rootlets also producing along the stem at short intervals.

Monitoring and rapid response: Grubbing is effective for small populations or environmentally sensitive areas. Juvenile plants can be hand-pulled when soil is moist. Wet all leaves thoroughly with one of the following herbicides in water with a surfactant (July to October for successive years); Repeatedly apply triclopyr aster or a glyphosate herbicide as a 4% solution in water with a surfactant, a less effective treatment that has no soil activity to damage surrounding plants. Early spring cutting and spraying effective. Credits: The information provided in this factsheet was gathered from the U.S. Forest Service.