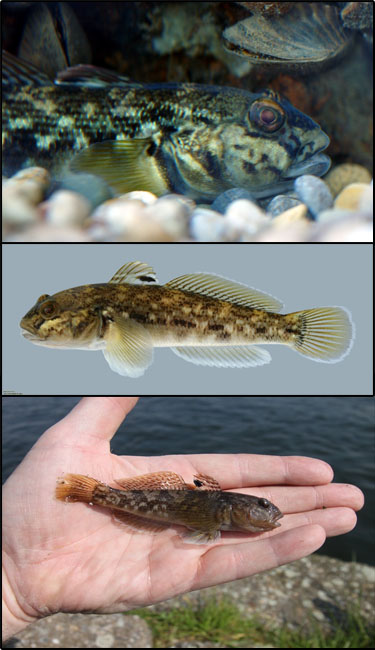 Description: Introduced to the Great Lakes region in 1990 in the St. Clair River through ballast tanks of ships.

Reproduction: Spawning season is between April and September. Females may repeat spawning during a season. During the mating season the male round goby's body is entirely black. Adhesive eggs are deposited on stones, shells and aquatic plants, and the males guard the eggs until they hatch. Males typically die after spawning season ends.

Impact and Damage: Round gobies' rapids reproduction rates allow this species to establish large populations that outnumber and outcompete native fishes such as sculpins and darters. They also prey on the eggs of native fishes.

Monitoring and rapid response: Preventive measures such as cleaning boats, trailers and equipment before moving to a new body of water can help control round goby populations. Electric barriers and pescicides have also been used to prevent the spread of round gobies into new bodies of water. Credits: The information contained in this factsheet was provided by the Shedd Aquarium.