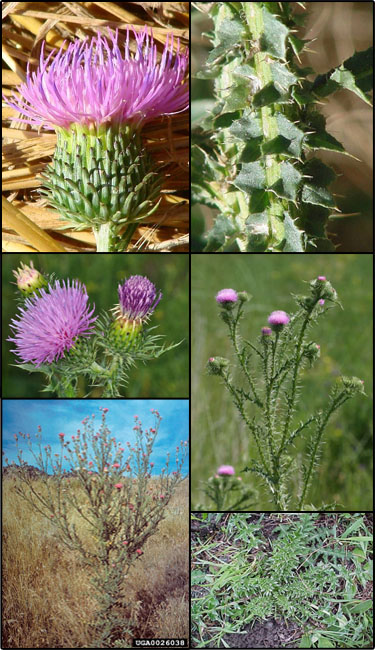 Description: First discovered in the United States and Canada in Camden, New Jersey in 1878. This species is listed as a prohibited noxious weed by the Michigan Department of Agriculture.

Leaves: Deeply lobed to pinnately-divided, up to 25 cm long and 8 cm wide, midrib beneath covered with long, soft hairs.

Stems: Erect, growing to 1-4 ft and having a stout, fleshy taproot. Freely branched above and covered with leaf-like spines that extend up to the flowering heads.

Flowers: Solitary flower heads at the ends of branches or in clusters of 2-5, bracts are narrowly lance-shaped and appear as sharp spines, Purplish to pink in color, clustered in heads that are 1-2 in in diameter; blooms from July to October.

Fruit and seeds: 4 angled, dry seed with a fluffy, but not feathery pappus, oblong, striate and slightly curved.

Habitat: Native to Europe and Asia. Grows well in disturbed areas such as pastures, roadsides, and railroad right-of-ways.

Similar species: Nodding thistle (Carduus nutans), which can be distinguished by the rosettes, which on the spiny plumeless thistle by its deeply serrate leaves. It can also be distinguished by its leaf-like spines on the stem and hairs on the underside of the leaf.

Monitoring and rapid response: Hand-pulling is most effective on small populations, can be done throughout the year but most effective prior to seed development. Effectively controlled using any of several readily available general use herbicides such as glyphosate or triclopyr. Also, two weevils, the thistlehead-feeding weevil and the rosette weevil have been introduced and has shown notable success (but this may impact native thistles). Credits: The information provided in this factsheet was gathered from the Colorado Weed Management Association and the Center for Invasive Species and Ecosystem Health.