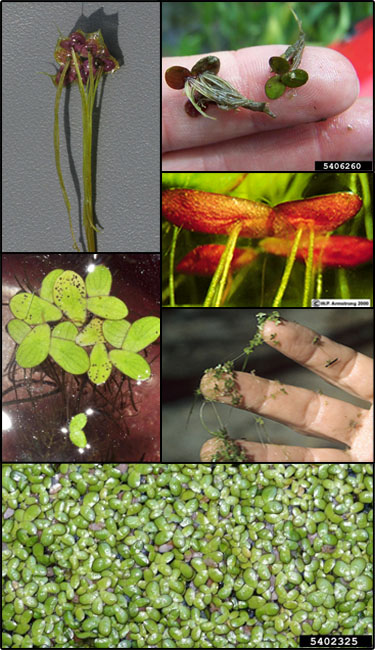 Description: Introduced to North America as an aquarium plant.

Leaves: Fronds appear 1.5 to 2 times longer than wide, with widths measuring from 1-3 (or 5) mm, narrowly egg-shaped to slightly kidney-shaped and intensely green in color, covered with a waxy layer of cuticle that makes plants sparkle in the sunlight. Fronds are not leaves; they may be a reduced form of stem and shoot.

Reproduction: Vegetative budding of daughter fronds from two pouches at the base of the frond. Daughter fronds often remain attached to the mother frond by a short stipe so that plants often appear as a cluster of several fronds. Rarely reproduces by seed.

Monitoring and rapid response: Diquat is a widely used and effective herbicide because it causes ion leakage in duckweed and other aquatic plants. May also be controlled by the use of Carfentrazone-ethyl 224g/ha Super (-1). Follow label and state requirements. Credits: The information provided in this factsheet was gathered from the ISSG Global Invasive Species Database and USGS Nonindigenous Aquatic Species.