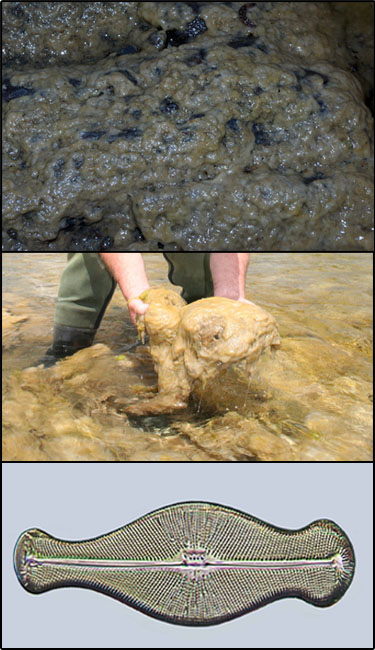 Description: Freshwater diatom typically found in cool, oligotrophic waters of northern Europe and Northern North America. Historically found in the Great Lakes basin and it was present in Canada in the late 1800s, but did not start to display invasive characteristics until the 1990s. Discovered east of the Mississippi River in 2005 in Tennessee.

Habit: Normally brown, tan or yellow in color. Unlike most algae, it feels like wet cotton and is not slimy. Sometimes mistaken for fiberglass or toilet paper.

Habitat: Freshwater rivers, streams and lakes. It occurs particularly in oligotrphic, clear water. It can thrive in clear, shallow, warm and nutrient-poor water, and is influenced annually by weather and rainfall patterns. Stable flow and substrate are required for initial attachment to the substrate (rocks or plants). Normally found in water with a pH of 7.

Reproduction: Spreads by the transportation of a single cell. Cells are distinguished by their large, triundulate frustule, shaped like a curved bottle, and prominent striae (regular lines of holes starting at the center line of the valve faces) which are radially arranged and variable in length at the center.

Impact and Damage: Potential to form massive blooms which can adversely affect freshwater fish, plant and invertebrate species by reducing the number of suitable habitats and excluding the growth of other diatoms. It is currently unclear what causes these blooms - whether it is nutrients in the water or different genetic strains.

Similar species: Cymbella spp., Gomphoneis spp., and Gomphonema spp. Can be distinguished from other algae based on its color (Didymo is beige, brown or white but not green); not slimy compared to other algae, it has no odor and does not fall apart when rubbed between your fingers like most algae.

Monitoring and rapid response: Before leaving a river, look for clumps of algae and sediment, and remove them. Leave them at the site. Soak and scrub all gear for at least one minute in a 2% (by volume) solution of household bleach, or a 5% (by volume) solution of salt, or dishwashing detergent. Note that all surfaces must be contacted by the cleaning solution. Water obsorbant equipment (lifejackets) should be soaked to insure they do not remain a risk. If cleaning is not practical, after the item is dry to the touch, leave it to dry for at least 48 hrs before using another freshwater source. Credits: The information provided in this factsheet was gathered from the Pennsylvania Fish and Boat Commission, The Michigan Department of Environmental Quality, The USDA National Invasive Species Information Center and the Global Invasive Species Database.