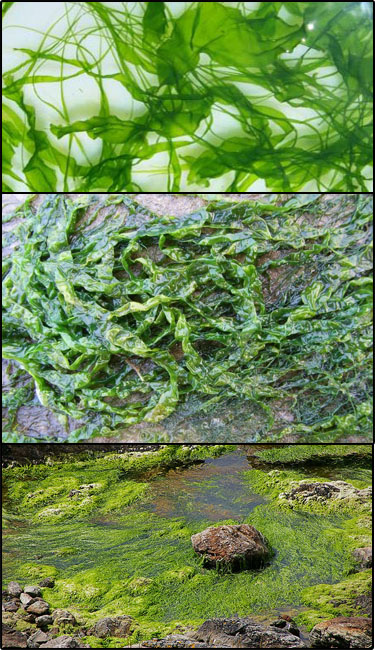 Description: Recorded in Michigan (Lougheed and Stevenson 2004) within the last decade. Also found in a Southeast Michigan stream in 2010.

Stems: Cylindrical throughout or with the terminal portion expanded and bladelike, or centrally compressed with only the margins hollow. Long and 1 cell thick and 1-7 mm. wide.

Habitat: Typically found in saltwater or brackish environments rather than freshwater but seem to particularly thrive in areas where freshwater run-offs occur. Also found in estuaries and saltmarshes, and is able to withstand low salinities. Where conditions are calm, may detach and survive as free-floating clumps.

Impact and Damage: May cause green tides and biofouling mats that cause cascading effects throughout the food web. Can deplete available oxygen in the water and increase the production of hydrogen sulphide in the sediment, which can cause population declines in other fauna and flora. Mats can also shade out native seagrass beds and negatively impact their corresponding communities Can distrupt feeding by wading birds.

Monitoring and rapid response: Reduction of pollution and nutrient run-off could decrease the habitat of Enteromorpha. Credits: The information provided in this factsheet was gathered from ARKive.org, The Michigan Department of Environmental Quality, USGS Nonindigenous Aquatic Species and The Smithsonian Marine Station at Fort Pierce.