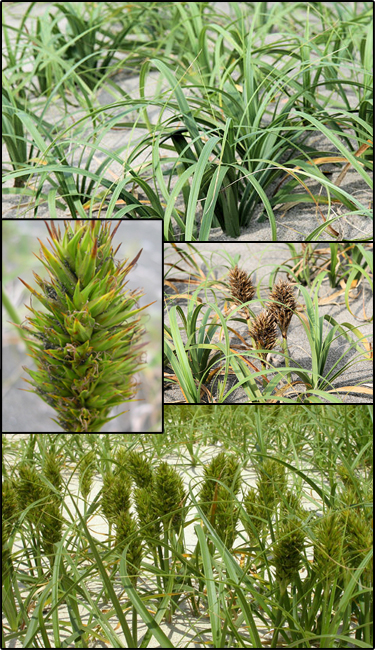 Habit: Perennial, stout, coarse, growing up to 1 foot tall and with an overall yellow-green color. Forms extensive colonies through rhizomes.

Flowers: Dioecious, numerous, subtended by scales and arranged in spikes at the end of a flowering stalk that is triangular. Flower from April to June.

Habitat: Native to coastal areas of northeastern Asia. Found in dunes and on upper parts of ocean beach wash flats.

Monitoring and rapid response: For small infestations, excavation of individual plants by digging or hand-pulling making sure to remove all parts of root system. Larger colonies may be controlled with 2% glyphosate and water solution applied to leaves during growing season. Credits: The information provided in this factsheet was gathered from the Plant Conservation Alliance's Alien Plant Working Group and the Invasive Plant Atlas of New England.