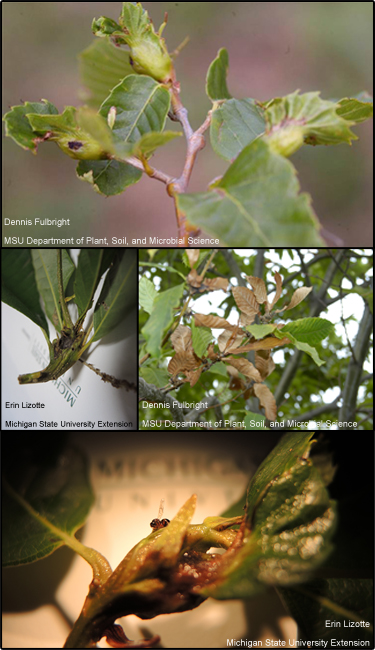 Description: First reported in the U.S. in 1974. It was observed on Chinese chestnut trees in Georgia after it was introduced on imported plant material. Over time, the geographic range has expanded. The gall wasp is now established in Virginia (2001), Ohio (2002), Kentucky (2003), Maryland and Pennsylvania (2006), Connecticut (2011), Massachusetts and Ontario (2012).Continued to spread across eastern North America by natural dispersal (e.g., adult wasp flight) and via human transport of infested plant material. The gall wasp was confirmed in Michigan in June 2015.

Identification: Adults are very small (2.5 to 3.0 mm). They have glossy black bodies with clear wings, and six orange legs. The abdomen is bulbous in shape, giving them an ant-like appearance. Yellow sticky traps may be hung to capture adults. Scouting for the galls caused by the gall wasp is the most common method of initial location. Visually inspecting for galls is one method of locating the gall wasp in the field. Scouting can take place at any time of the year as the galls persist on the tree even after the wasps emerge in early summer. Leaves often remain attached to the galls during the winter making them highly visible at that time.

Life Cycle: One generation per year via asexual reproduction. Adult females lay eggs inside buds in early summer and eggs hatch soon after. After egg hatch, the larvae remain inactive until budbreak the following spring, when they induce the formation of galls. Galls can form on the stem, petiole, or leaf and provides the larvae and pupae protection. Adults emerge from galls in the early summer and locate new chestnut shoots, laying eggs for the next generation. After the wasps emerge, galls become woody and dry out, potentially persisting on the tree for several years.