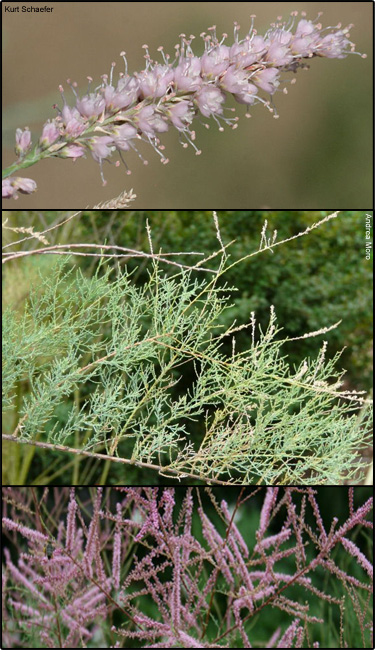 Description: It is extensively established in the southwestern United States and Mexico. Believed to have been introduced on the East Coast in 1823 as an ornamental.

Leaves: Compound, alternate, scale-like and tightly overlapping along the stem.

Habitat: Native to Eurasian and Africa. Found in disturbed and undisturbed streams, waterways, bottomlands, banks and drainage washes of natural or artificial water bodies, moist rangelands and pastures. Capable of growing in soils containing up to 15,000 ppm soluble salt.

Reproduction: By root expansion, resprouts and by seeds that are dispersed through the air and by water.

Monitoring and rapid response: Hand pulling, digging, root-cutting, and the use of hand tools is recommended for small infestations. Fire has been used, but saltcedars are fire-adapted and readily resprout. Can be effectively controlled using any several readily available general use herbicides such as glyphosate or triclopyr. Credits: The information provided in this factsheet was gathered from the U.S. Forest Service.